Some Paintings Headed to Principle Gallery

I'm thankful to have been invited to participate in Principle Gallery's still life show coming up in April. Here are some paintings that I'll be sending down at the end of the week. 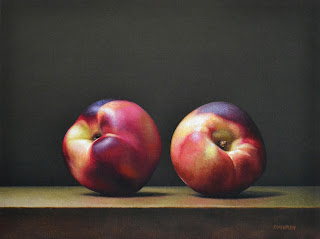 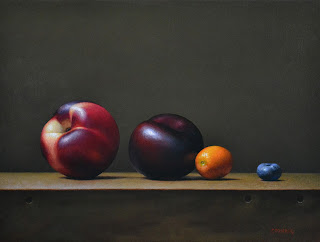 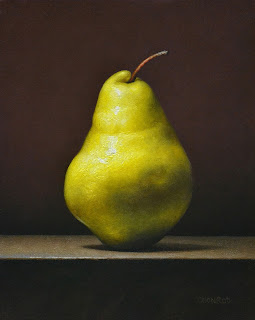 And this painting will be on view also. 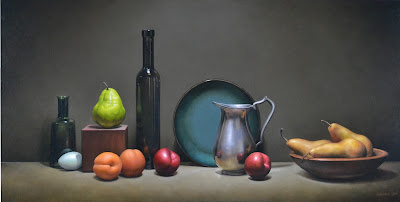 Posted by Trish Coonrod's Paintings at 1:49 PM No comments: 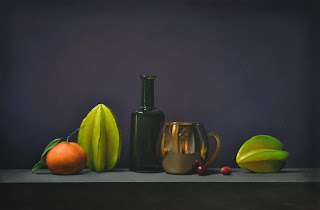 I finished this about 3 or 4 weeks ago, just after finishing "4Pairs".  I wanted to build another composition working with this muted purple drape that is so vexing.  To look at it in my hand, it's a beautiful subtle dusty purple with a hint of red. In my painting it kept looking very saturated and synthetic and I hated it. I was able to beat it into submission after I threw out the dioxazine purple, but I'm going back to my favorite brown drape now. 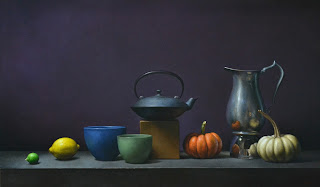 This is an image of the painting "4 Pairs" in its finished state, completed in early January, it's 26 x 46 inches, oil on canvas. I'd had a different painting on these stretcher bars until last Fall. It was a landscape that I started in 2005 and worked on for almost three years.  It was called "Spring Landscape" and was sort of a breakthrough painting for me, but it ended up falling several times and had cracks in a few places where it landed. (hint, don't bring a large painting to an outdoor festival on a windy day)  I hung on to it though because I had put so much into it.
I suppose most people have heard about The Life-Changing Magic of Tidying Up by Marie Kondo.  The main point I took away from the book is that one should only keep the stuff that brings them joy. Well, that damaged painting hanging like a rain cloud in my living room was certainly not bringing me any joy, so I gave myself permission to cut up the canvas and toss it.  No regrets, and now I have this instead.

In my last post I wrote about the very beginning steps of this painting up through finishing the first pass. In this post I'm going to show some progression shots of the bottom right side of the painting. 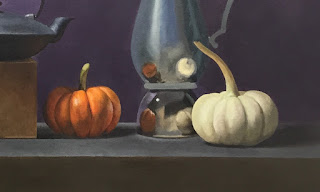 This is what the area looked like after the first pass. I like to cover all areas of the painting with my best shot at the simplified color and value because as long as there are areas of white canvas showing, my perception of relative values will be skewed. 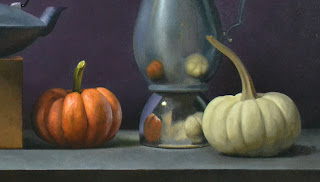 Now that the canvas is covered I can start adjusting. Because I gravitate towards a full value range in my paintings, the next steps usually involve making the darks darker and deciding which points, if any, will be pure white. Once the absolute whites and blacks are decided, everything else has to find its place in between. It's like a puzzle to me. An example would be the pumpkin on the right. It's a creamy white color but the only places that I want to use pure white would be the highest highlights on it. Everything else has to be darker that those highlights or they won't read as highlights   And the highlights on the white pumpkin are lighter than the highlights on the orange one. Finding the relationships in value and color is the main activity for me in painting. 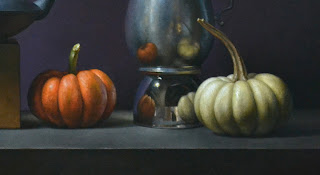 This is what the area looks like in its finished state.  I moved the orange pumpkin forward from it's original spot because I had a hard time getting the cast shadow on it to look right.  Behind the pumpkins is a shiny silver bowl upside down with a pewter pitcher on top. I was interested in the different finishes on them and thinking a lot about how they reflect light differently. In the bowl you can almost see a tall middle aged woman painting. 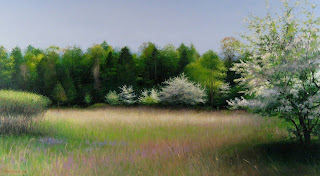